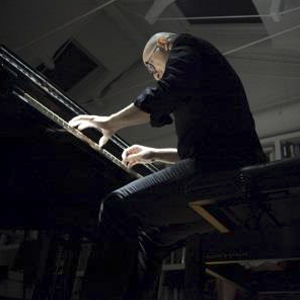 David Ortolà (1975) is a composer, pianist, and electronic music producer. His music combines the sounding worlds he comes from –classic, electronica and jazz–, with the same passion and conviction. He has composed works for different contemporary ensembles, video productions and electronic music labels such as Factor City, Eleve, Loudeast, Turbo, Odori and his own independent label, Kontakte. At the piano and/or at the machines, he has performed his own creations in concert halls, in renowned festivals such as Sónar (Barcelona) and Observatori (Valencia), as well as in European clubs. He has also performed and produced with outstanding figures of techno, house and the experimental electronics scene such as Simon Mills (Bent/Napoleon), Nacho Marco, Common Factor and DJ/rupture, and publishes regularly with the bands Betelgeuse and Lontano / Pajaro Dune, this last one along with Jaime Romero. His music was at the center of the multipiano concert organised in 2011 by Musikeon and Clemente Pianos, where his work for 20 pianos Efímeras (2011) was premiered.