Mireia Vendrell del Álamo, born in Barcelona 1986, achieved her Honours Piano Degree at the Escola Superior de Música de Catalunya. She continued her Studies at the Musikeon Courses in Valencia (Spain) under the guidance of Luca Chiantore. In 2012 she completed her studies in Contemporary Piano Performance at the State University of Music and Performing Arts Stuttgart (Germany) under the guidance of Prof. Nicolas Hodges. She has participated in masterclasses under Josep Mª Colom, Piero Rattalino, Eric Heidsieck, Christian Zacharias and Dimitri Bashkirov. In 2007 she recorded her solo CD “Hier ist Friede” including works by Gideon Klein, Anton Webern and Sergei Prokofiev. Other recordings include the monographic CD “Tutto Demestres I” by the Spanish composer Alberto García Demestres. As a contemporary music specialist she has worked together with composers such as Frederic Rzewski, Mathias Spahlinger, Enno Poppe or Jörg Birkenkötter. Furthermore she has premiered solo pieces of Raquel García Tomás, Luis Codera Puzo and Christian Pedro Vásquez Miranda, among others. She has also premiered chamber music works of young composers as a member of EthosDuo and CrossingLines Ensemble (Barcelona). Mireia Vendrell lives and teaches currently in Bremen. She is pianist of CrossingLines Ensemble and founder member and pianist of Ensemble New Babylon. She appears regularly in festivals in many European countries. More information: www.mireiavendrelldelalamo.com.

Josep Colom Born in Barcelona, Spain, in 1947, he estudied piano in Barcelona and Paris. In young age he won the International competitions of Jaen, Épinal and Paloma O’Shea of Santander, and later on the Ministry for Culture of Spain gave him the National Prize of Music. In the 70s he moved to France and studied in the École Normale de Musique, and most of his discography runs under the label “Mandala”. He made his debut at Théâtre des Champs Elysées in Paris, in 1979. He has played with all the Spanish orchestras but also in recitals and chamber music in all the major festivals and auditoriums, in Spain and abroad. Though his introversive temper, being mainly inclined to play recitals and chamber music, he doesn’t renounce to the opportunities of enjoying the marvels of orchestral repertoire. Also he has recorded the complete Sonates of Blasco de Nebra and the complete works of Manuel de Falla, considered by the Fanfare Magazine de Nueva York as the best version of these works. He has also recorded the complete works of Mompou, the concerts and complete variations of Brahms as well as works by Fauré, Debussy and Ravel. Pedagogy has obtained increasingly a special value for him; apart from teaching regularly in master classes, he teaches since 1990 in the University of Alcalá de Henares (until 2012), in Superior Conservatory of Zaragoza, as well as Musikeon in Valencia, and nowadays, from 2012, he teaches in Superior Consevatory of Liceo, in Barcelona. Further information at www.josepcolom.com. 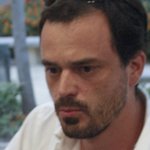 Diego Ghymers (Santiago de Chile, 1974; Albacete, Spain, 2015) spent his childhood in Belgium. He started studying piano at the age of 5 with G. Petiberghein, and subsequently J. Delo and N. Nihonmatsu, combining his classical training with contemporary music and experimental rock bands. After graduating from the University of Louvain, in 2000 he moved to Spain, where he continued his musical studies under Luca Chiantore and Pablo Gómez Ábalos at Musikeon, and also took classes with outstanding figures such as Katia Labèque, Alicia de Larrocha, Ton Koopman, Misha Maisky, Joaquín Achúcarro, Eric Heidsieck and Piero Rattalino. He has given recitals and lectures at prestigious Belgian, Chilean and Spanish institutions, as well as pursuing his growing interest in composition, jazz and experimental music. Since 2005, Ángela López Lara and Diego Ghymers have formed the duo “4 hands & 4 feet piano”, performing at concert halls, universities, museums and cultural centres all over Spain. Together they have given lectures and courses at various conservatoires and educational institutions. In 2009, he moved to London to study a Master Degree in piano and composition at Trinity College of Music under Douglas Finch, Stephen Montague and Errollynn Wallen. In 2009 he created the London Soundpainting Orchestra, that he has regularly conducted in a variety of London venues (Queen Elizabeth Hall, Institute for Contemporary Arts). He has been also active on the chamber music scene (Ghymers Trio, O3 Trio, Wren Ensemble), having performed in venues such as St Martin-in-the-Fields or the Wigmore Hall. In 2011, he was appointed teacher of Generative Techniques at Trinity College of Music. Diego Ghymers tragically died in a car accident in September 2015. Our Tropes on Chopin’s B-flat Sonata are dedicated to his loving memory.